Gone Girl: So, about that ending… 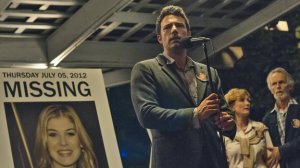 I first picked up Gillian Flynn’s Gone Girl earlier this year. It was an impulse buy at an airport, a read for the flight, a book I’d read some good reviews for and figured was worth checking out.

Let me tell you, I can’t remember the last time I read through an entire novel so rapidly.  From beginning to end, Gone Girl is a spellbinding, cutthroat page turner. Dark, vicious, morbidly funny and utterly brilliant, Gone Girl is an absolute must-read. The movie, which I saw on opening night last week, is also excellent.  The direction is slick, the story is faithfully adapted, and the acting is phenomenal. When I say that it’s not quite on the same level as the book, I don’t mean to diminish the movie’s impact; it’s just that the book is so damn good, and the story—particularly the infamous plot twist—is simply more effective as a novel than as a film.

Anyway.  After meditating on both the film and the novel, I feel it’s time that we talk about some things—and by things, what I’m really referring to is that chilling climax.  Yes, the ending. What else?

So, to be safe, here’s the necessary SPOILER WARNING!

SPOILERS COMING, HOLD ONTO YOUR HATS! 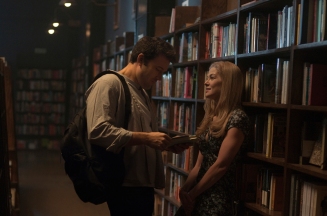 The ending of Gone Girl has always been controversial, and now that the movie has exposed a whole new legion of formerly innocent bystanders to Flynn’s dark, cutthroat bestseller, that controversy has only expanded. Though rumors throughout production implied that Flynn, who also wrote the movie’s script, was going to change the ending, the final movie stayed true to the book. While the framing of the ending was slightly altered, the ending itself was faithful. And, like it or not, we all know what that ending is:

Amy’s final manipulation is to get pregnant, and so she and Nick stay together. After all the violence and heartache, Amy wins. Or does she?

It’s a remarkably cold, uncomfortable ending, no doubt. When I first read it, my initial reaction was discomfort, followed by bewildered confusion. That was it? The ending leaves the reader with a sick feeling in his/her stomach, and a seeming lack of resolution.

But the more I thought of it, the more I realized that Gone Girl’s controversial ending is shockingly perfect. I’d go so far as to say that, based on what we know of the story’s two protagonists, it’s the only way it could end.

Let’s face it, both of these two characters are horrible spouses, but also horribly suited for each other. Nick is naïve, simple, fraught with desperate and needy self-consciousness, and he’s clearly a bit of a narcissist; though he isn’t inherently dangerous, there’s nothing in Nick’s world but Nick. Amy, of course, can only be described as an equally narcissistic, cunning, brilliant psychopath. She knows what she wants, and she doesn’t care who she has to maim, injure or ruin in order to get it. She plans things out to such an extent that it’s almost impossible for anyone to find a loophole.

As Gillian Flynn said herself, in an interview about the subject:

What did you want to accomplish with the ending?

First of all, I didn’t write it as an open ending to set up a sequel at all. It was the only thing that made sense to me, that made sense to what was true to the book and true to the characters. Amy’s not going to end up in jail. She’s Amazing Amy! You’re never going to find the aha! clue because she thinks she’s already thought of everything and that’s who she is. People think they would find that satisfying, if she were caught and punished. You know, when I’m at a reading or something, people will come up to me and are very honest about saying, “I hated the ending!” I always say, “Well, what did you want to have happen?” And it’s like, “I wanted justice!” I promise you, I just don’t think you’d find it satisfying for Amy to end up in a prison cell just sitting in a little box.

I know a lot of readers wish she’d died.

That would have been the other option, to kill her off — but who’s going to do that? I’m not going to have Nick do that. He’s not going to do it. And to have anyone else do it is putting him back in the stage where he started out, which is having other people do his dirty work all the time, so that didn’t work for me either. So you know, I did think it all through, and for me, I’ve always loved those endings of unease.

It’s certainly not the ending that the reader/viewer is expecting—in a sense. However, what makes the climax so fascinating is that, on another level, it is the ending that we expect. It’s the same ending we always expect, in every story.  Really, it’s the famous Hollywood-style happy ending, satirically turned on its head.  Consider, we have a plot wherein the boy wins the girl’s love back, their marriage is saved—they even have a kid! – but because of how terribly distorted these two people have become, all of these conventions are shredded into pieces. The “happy” ending is exactly the ending we don’t want, as something that should be joyous and cathartic has instead been reduced to being utterly loathsome, miserable, disturbing—and painfully unsatisfying.

That’s the genius of it.

Because at it’s core, Gone Girl is a story about masks we wear, as well as the masks that society forces upon us.  Whether it’s wife-killer, “cool girl,” good cop/bad cop, “loving and concerned parents,” or any number of other roles that we play, Gone Girl pulls back the curtain to reveal the potential ugliness that can lie beneath the surface of any well played part.  The titles of “husband” and “wife,” to the two characters in this story, are more than just titles; they’re names, roles to play, roles that must be played correctly.  To them, a “happy” marriage has nothing to do with comfort, and everything to do with performance.  The combination of Amy’s controlling vindictiveness with Nick’s self-conscious weakness is crucial here, because it means that both of them slide into place so easily, yet so falsely, that the end result is both natural and hideously unnatural.  It’s only fitting, in a story like this, that the traditional happy ending is played out in such a perverted fashion. 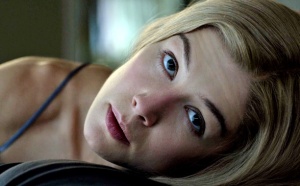 I think a large part of the alarm that many readers (and now viewers) experience at the ending is because by this point in the story, the tension is so wound-up, so tight, that it seems to require a devastating explosion to equalize it. But that isn’t what happens. Instead, the ending peters out uneasily—and that’s exactly what makes it so good. The tension isn’t resolved, and it might never be. These two people, with all of their psychological issues, are going to be trapped in this horrible union for the rest of their lives.

That’s the question, isn’t it? As the story comes to a close, we see a Nick Dunne who is undergoing a transformation into the “cool guy” counterpart to Amy’s “cool girl,” a fake personality that Amy describes earlier on. Again, consider that this is a story about masks.  Nick, because he can’t not provide for his child, is forced into this box, becoming exactly the person that Amy wants him to be. The “perfect man.”

The inherent problem, of course, is that this can’t last. Just like Amy couldn’t be the cool girl forever, Nick won’t forever succeed at being the perfect man. And when he fails, when his mask finally slips, there’s no telling what might happen.  One gets the strong sense that the events of the novel may precede a greater evil yet to come. As the last page of the novel chillingly illustrates, the future of Amy and Nick’s marriage is likely a dark one.

19 thoughts on “Gone Girl: So, about that ending…”