So, I’m going to try something different here.  I love connecting with you guys on here, and browsing through posts and comments as I enjoy a morning cup of coffee. Now, sometimes, I have bite-sized “coffee thoughts.” You know, those thoughts that aren’t quite big enough for a full blog, but longer than oh, say, a tweet? Right. Based on said coffee thoughts, meet the first edition of Coffee Thoughts, where I’ve pulled together little notes from the past month into one blog. Dig the format? Let me know!

… and happy new decade, on top of it? Talk about a crazy ride. At the beginning of the 2010s, I was a kid traveling across the country by myself, dreaming of someday being a writer. In 2020, I’ve become a full-time writer, published multiple books, grown into a husband and then a father, and changed in more ways than I can count. This has been one hell of a decade, and I want to offer a huge thanks to all of you, particularly the ones who have been along for the ride since 2013 (!), when I first started this blog. You guys are awesome, and thank you for that.

This’ll be a big year, ahead. As I said before, I have a new novel waiting in the wings, and I can’t wait to spill the details. Soon.

The world of entertainment keeps on keepin’ on

This is really more a December note, but still. If you haven’t yet seen Watchmen on HBO, stream it. Yes, even if you haven’t read the graphic novel. Yes, even if superheroes aren’t your thing. It takes a few episodes to really get rolling, but once it does, Watchmen proves itself to be the best TV series of 2019, and arguably, one of the most important of the decade.

In other movie and TV news: okay, so The Mandalorian is actually a lot of fun. And yes, yes, Baby Yoda (ahem, “the Child”) is just as adorable as the memes. Haven’t seen the new Star Wars movie yet, so I can’t comment on it. Also, I’m enjoying those Sinister Six hints in that Morbius trailer, though hoping the movie itself has a more interesting story than the trailer implies.

Ever hear about the Marshall Islands? This is an issue that needs to get more attention.

As I wrote about on Grunge, this chain of volcanic islands in the Pacific had 67 nuclear bombs dropped on them, via the United States, from 1946 to 1958, causing widespread cancer and birth defects. That’s horrifying enough, but now, a nuclear disaster is in the making: the so-called Runit Dome, which is the concrete structure that the U.S. dumped all of their radioactive waste into, is predicted to crack sometime in the next century. The cause? You guessed it: climate change. This whole situation is obviously the fault of the U.S. government, but evidently, the world’s richest country is currently ignoring the pleas of the Marshall Islands, and claiming that the Marshallese have to deal with it themselves.

Horrifying? Yes. Unacceptable? Absolutely. While the L.A. Times did write about this back in November, this whole situation needs more airtime.

The News Cycle is a Dumpster Fire

And thus, the Trump impeachment has begun. About time? For sure, but still, it’s strange to watch it finally play out. I mean, obviously, the Trumpster is corrupt to the point of seeming cartoonish: after all, this is a guy who quite literally had to pay $2 million in damages last month because he was stealing money from his own charity to do things like buy paintings of himself. Is this real life? Unfortunately, yes, and the fact that the above story barely stirred the news cycle shows just how ludicrous this whole thing has gotten. However, the current GOP establishment is still pledging loyalty to their emperor, so a disappointing conclusion to the impeachment seems like a foregone conclusion. That said, Trump is a criminal, so putting him on trial (at the very least) seems necessary, regardless of how this all ends.

Nonetheless, it’s important to remember that Trumpism is just one particularly vile symptom of the U.S.’s bleeding wounds, not the original cause of them. These issues go back decades. Trump just exploited them. And honestly, even if he were removed, you have that bigoted fanatic Mike Pence sitting behind him. You know who Pence is? Oh yeah, that’s right, just the living embodiment of Reverend William Stryker, that nutcase from X-Men: God Loves, Man Kills, with all the zealotry and self-righteous hypocrisy to match. Hey, seriously, I’m not the first one to notice this: 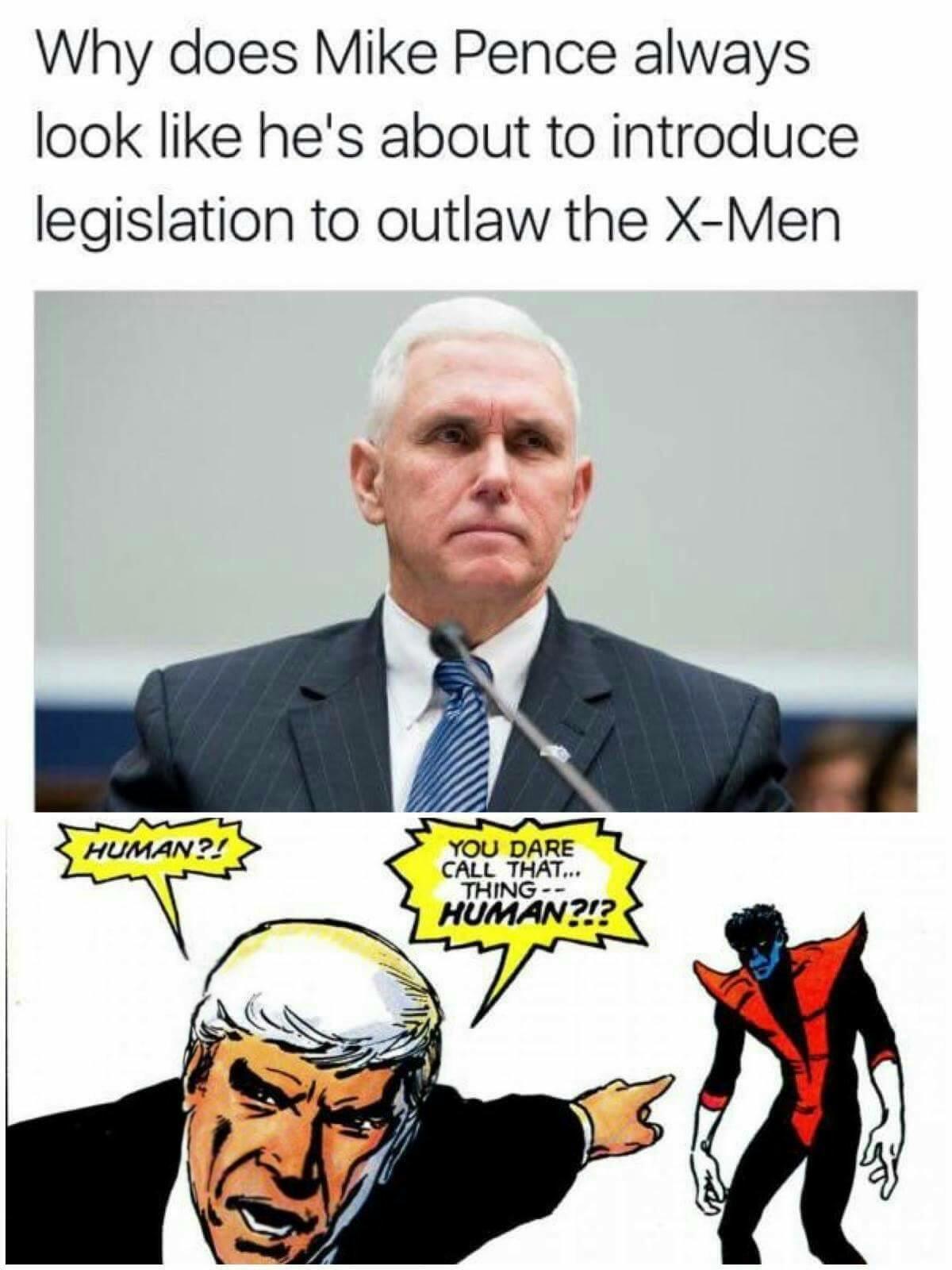 Okay, enough news. Something happier. Here is Nova, my noble friend, showing off her favorite Nicholas Conley novel. Or maybe she’s just trying to figure out if there’s a doggy treat hidden inside?

Family, fatherhood, and all that good stuff

On a final note: in my last post, I shared the news about our impending baby. Now that she’s here, though, I could’ve never predicted how much my life would instantly change. That’s a cliche statement, for sure, but it’s a true one. Being a parent is already the most beautiful experience I’ve ever had. Truly. Just watching her experience everything for the first time, to feel the love as I hold her, to look into those little dark eyes that are so full of curiosity and wonder … and on top of that, to have the opportunity to share this experience with my wife, the person who amazes me more than anyone else in the world, has already made 2020 my favorite year to date. And it’s only been a little over three weeks!

Until next time, folks. Enjoy the rest of your morning coffee, and I’ll do the same.