You ever run out of gas on the highway? I have. A couple weeks ago. And let me tell you, it sucks.  But I would never take back the experience. Not because running out of gas was a good thing, but because I feel lucky to have encountered someone, as a result of that experience, that I will never forget. Every once in a while, one comes across a person so innately good—a person possessing that simple, honest goodness from deep within, that is all too rare—and you just have to step back, admire them, and be happy that such a person exists.

Running out of gas is one of those stupid mistakes that we all think we’re too smart for, but most of us are guilty of doing at least once. It’s a problem so easy to avoid, but in the midst of our hectic, post-millennial go-go-go lifestyle, mistakes happen.  This was one such time.

A few weeks ago, I was going down the highway in Maine, running a couple minutes late for an appointment that was over an hour’s drive away. I was listening to music and enjoying the fall colors, when I suddenly noticed that I was running on E. This was the first head smacking moment of the day, as I’d noticed the gas gauge the night before and made a mental reminder to get gas first thing in the morning.

Nonetheless, at this point, I wasn’t too worried.  I figured I would just hop off on the next exit and stop at a gas station. The problem was when that next exit didn’t appear. 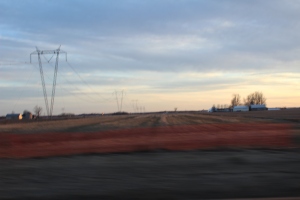 Another mile. Three miles. Six miles. Eight. I was on an unfamiliar highway, no exits had appeared, and right as I was getting frantic, the car finally started sputtering its death cries. I pulled over to the side of the road, and my race against the clock ended. The car, that beautifully functional combination of machinery, rubber, oil and electronics that we take for granted, devolved into a motionless hunk of metal.

Nonetheless, I didn’t want to miss my appointment, and I still had hope I could make it. I was on a downhill slope.  So I put the car into neutral and started chugging along. Downhill.

At this point, I finally came to the exit I’d been hoping to find all along—complete with signs advertising a gas station!—and so I rolled off the highway, down the hill, into the gas station parking lot…

…and it was closed. Down, decrepit, probably out of business for years. Still in neutral, I turned around and continued down the road, going under the highway overpass and arriving at a second gas station. It was also closed. Cursing the forgetfulness that had caused the events of that morning, I kept chugging along in this unfamiliar residential neighborhood, in a town I’d never heard of, until an uphill slant finally killed my momentum. The car offered its final push, and then stopped dead in the middle of the road.

I struggled to push it off to the side for the next ten minutes, having no luck. It was then that from the corner of my eye, I saw a stocky, white haired man climb out of his pickup truck, walk up behind me and call out in a gravelly voice, “Hey!  You want me to help you push that off to the side?”

I said yes, thanking him profusely. As we pushed it off the road, he asked what was wrong with the car, and I explained the gas situation. I asked him if he knew where the nearest gas station was, and if he could point me in the right way.

With a nod, he said “Yeah, about two miles out, you ain’t too far off. You know what, hop in. I’ll give you a ride there.”

I hopped into his truck, where his smiling black Labrador was hanging its head out of the window. The man, who said his name was Lane, gave me a ride to the gas station, drove me back, and then talked me to as I refueled the vehicle.  We talked about current events, differences between NH and Maine laws, Alzheimer’s, and at one point he mentioned how for years he had helped out one of his old neighbors, a woman diagnosed with MS, when her sons had moved away. Afterward, we shook hands and went our separate ways, probably to never see each other again.

Obviously, I thanked Lane for his help about a dozen or more times, but I really can’t express how much his kindness meant to me at that moment, when—due to my own inattentiveness, in regard to the gas gauge—I had become so frantic with frustration and tension. Lane didn’t have to take time out of his day to help me.  He could’ve drove on, continued about his way, never paid a second thought to the car stuck in the road. But he didn’t drive on.  He stopped, took time out of his schedule and offered help to a complete stranger, without asking for anything back.

It’s people like Lane that form the backbone of society, people like him that prove that being human still means something.  Thank you, Lane, for reminding me of that. Thank you for being who you are.